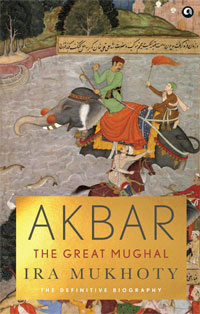 In this book, acclaimed writer Ira Mukhoty covers Akbar’s life and times in lavish, illuminating detail. The product of years of reading, research, and study, the biography looks in great detail at every aspect of this exceptional ruler—his ambitions, mistakes, bravery, military genius, empathy for his subjects, and path-breaking efforts to reform the governance of his empire. It delves deep into his open-mindedness, his reverence towards all religions, his efforts towards the emancipation of women, his abolishing of slavery and the religious tax—jiziya—and other acts that showed his statesmanship and humanity. The biography uses recent ground-breaking work by art historians to examine Akbar’s unending curiosity about the world around him, and the role the ateliers played in the succession struggle between him and his heir, Prince Salim (who became Emperor Jahangir).

Beautifully written, hugely well-informed, and thoroughly grounded in scholarship, this monumental biography captures the grandeur, vitality, and genius of the Great Mughal.

About the author: Ira Mukhoty is the author of Daughters of the Sun: Empresses, Queens and Begums of the Mughal Empire and Heroines: Powerful Indian Women in Myth and History. She writes rigorously researched narrative histories.

Irrfan Khan: The Man, The Dreamer, The Star

OPINION
Digital is the core of the
publishing enterprise

Hyper personalized learning is the code
to crack Industry 5.0

The Indian Edtech Industry is indeed
‘THE NEXT BIG THING’

Role of Technology in Education

PUBLISHER IN FOCUS
In Solidarity With Ukrainian Publishers…

CHILDREN’S PUBLISHING
How is technology changing the face
of children publishing?

TECHNOLOGY IN LEARNING
Learning made easy!

TRENDS
“Digital content is the need of the hour”